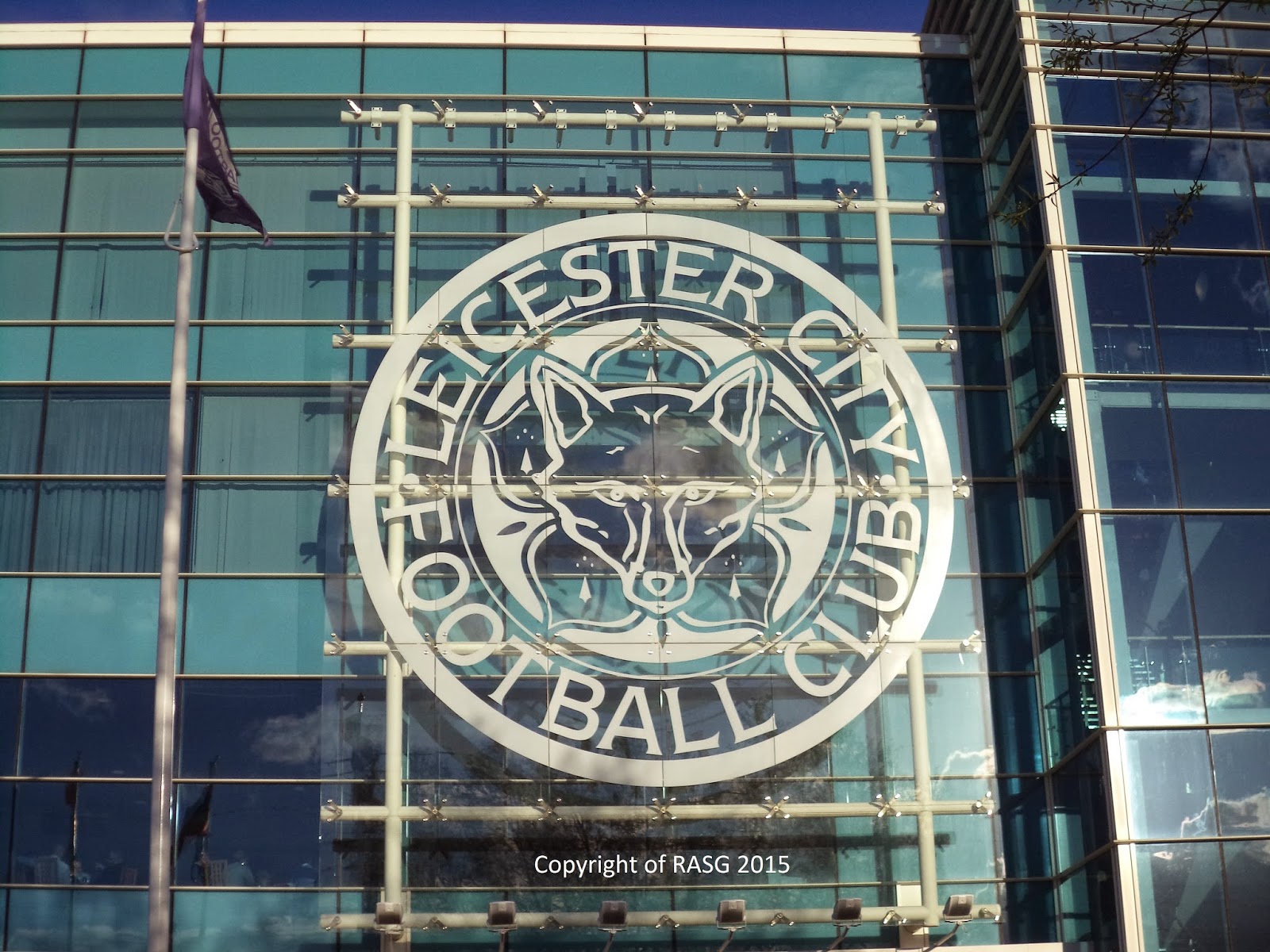 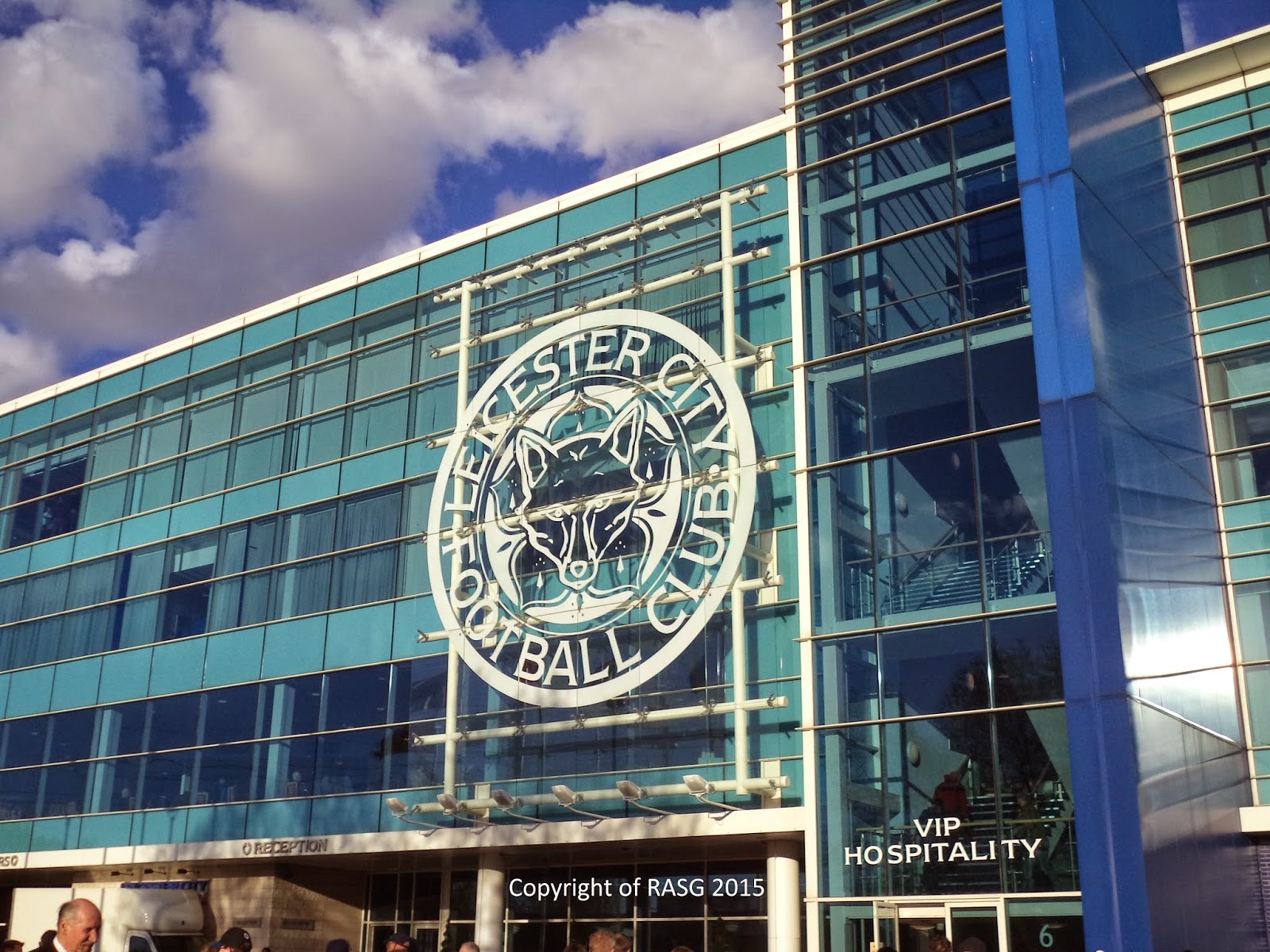 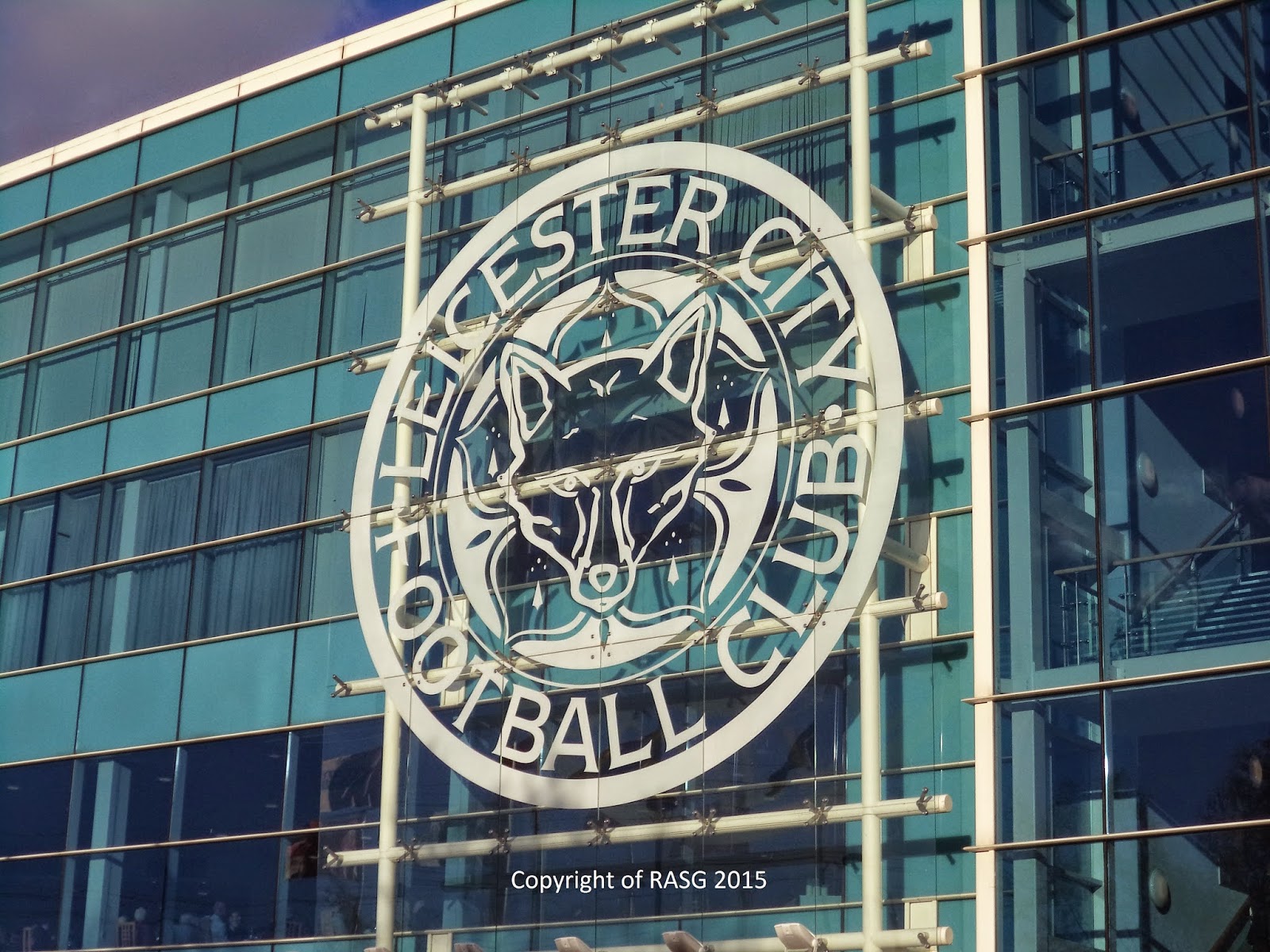 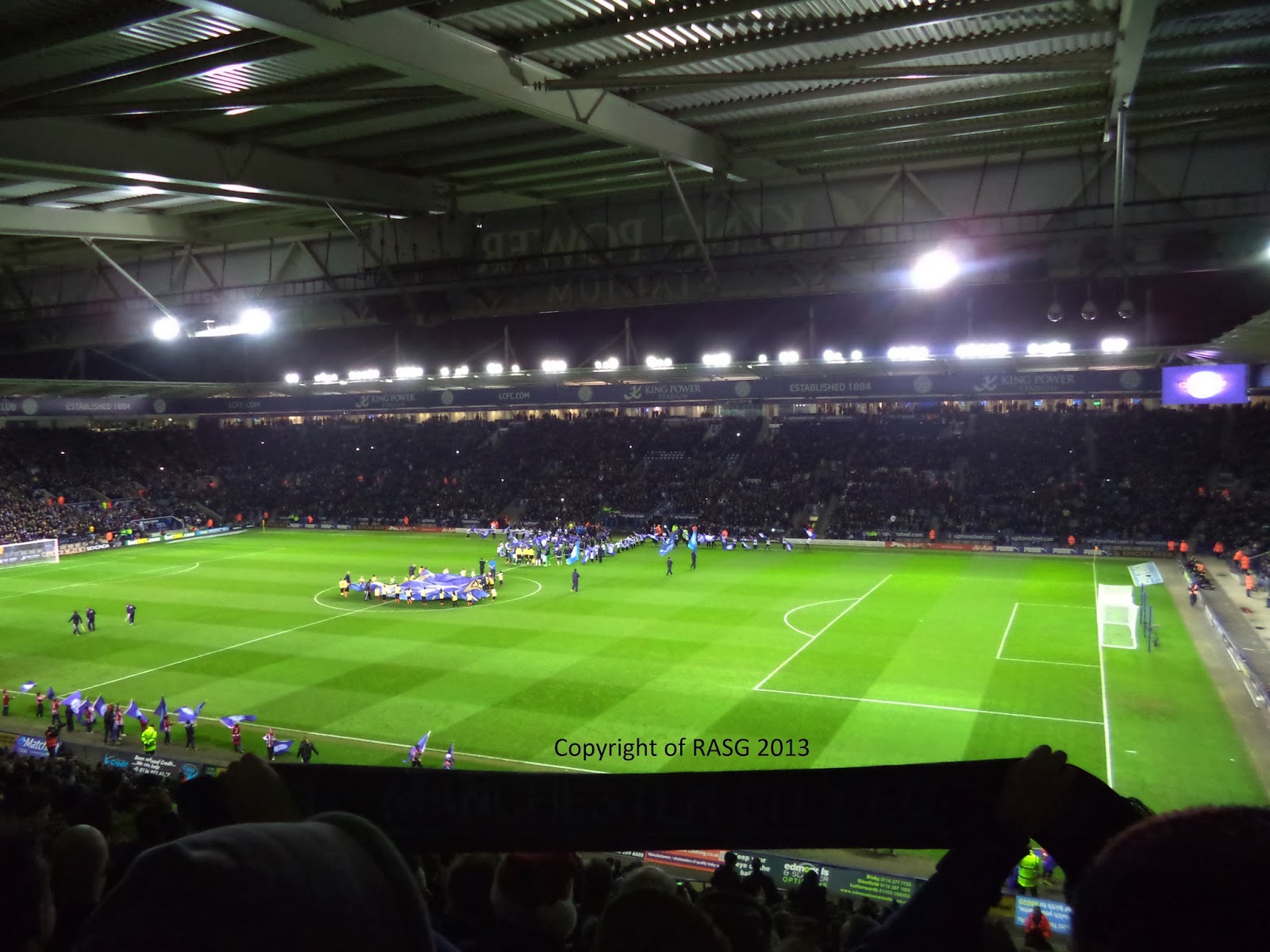 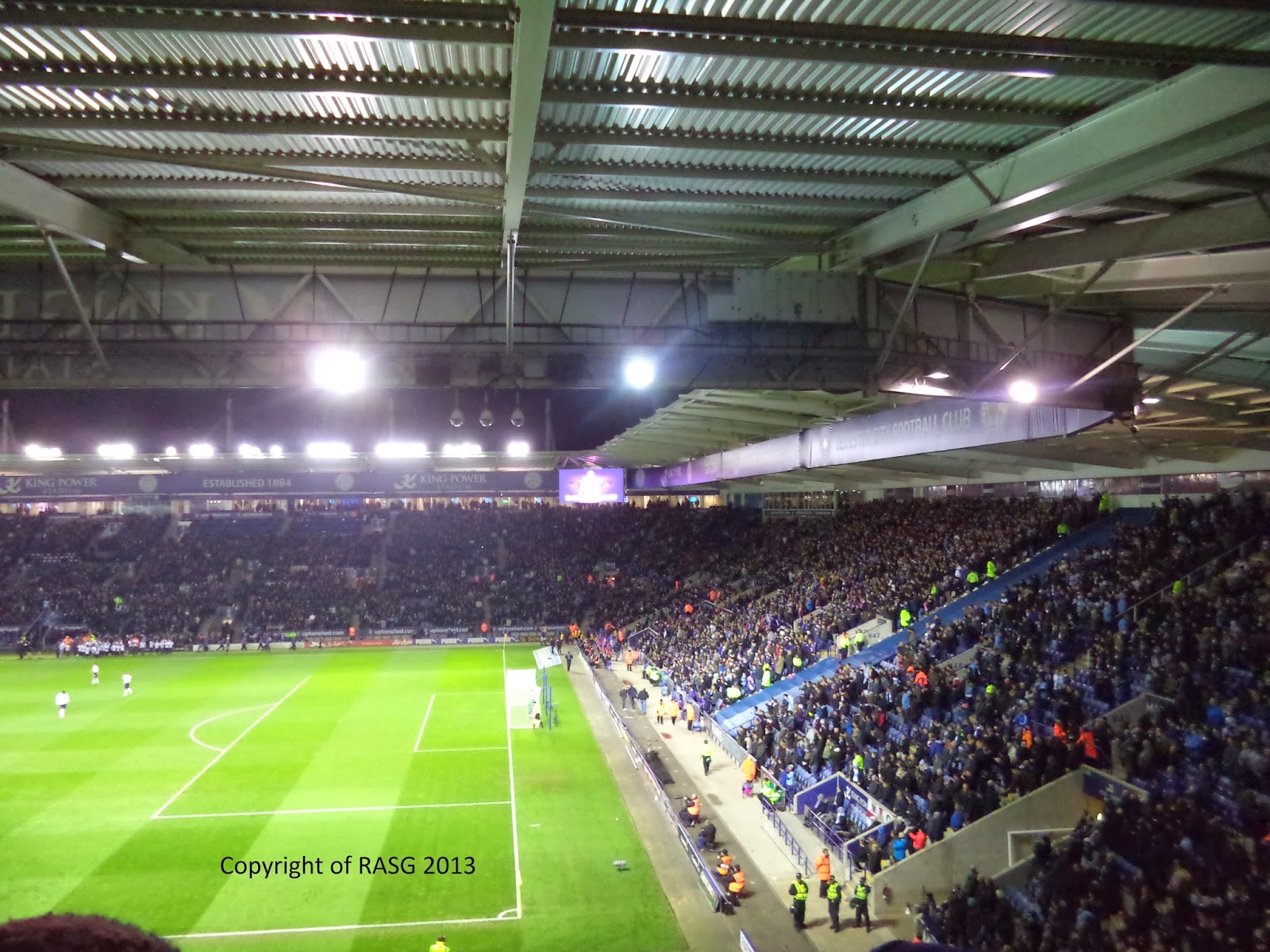 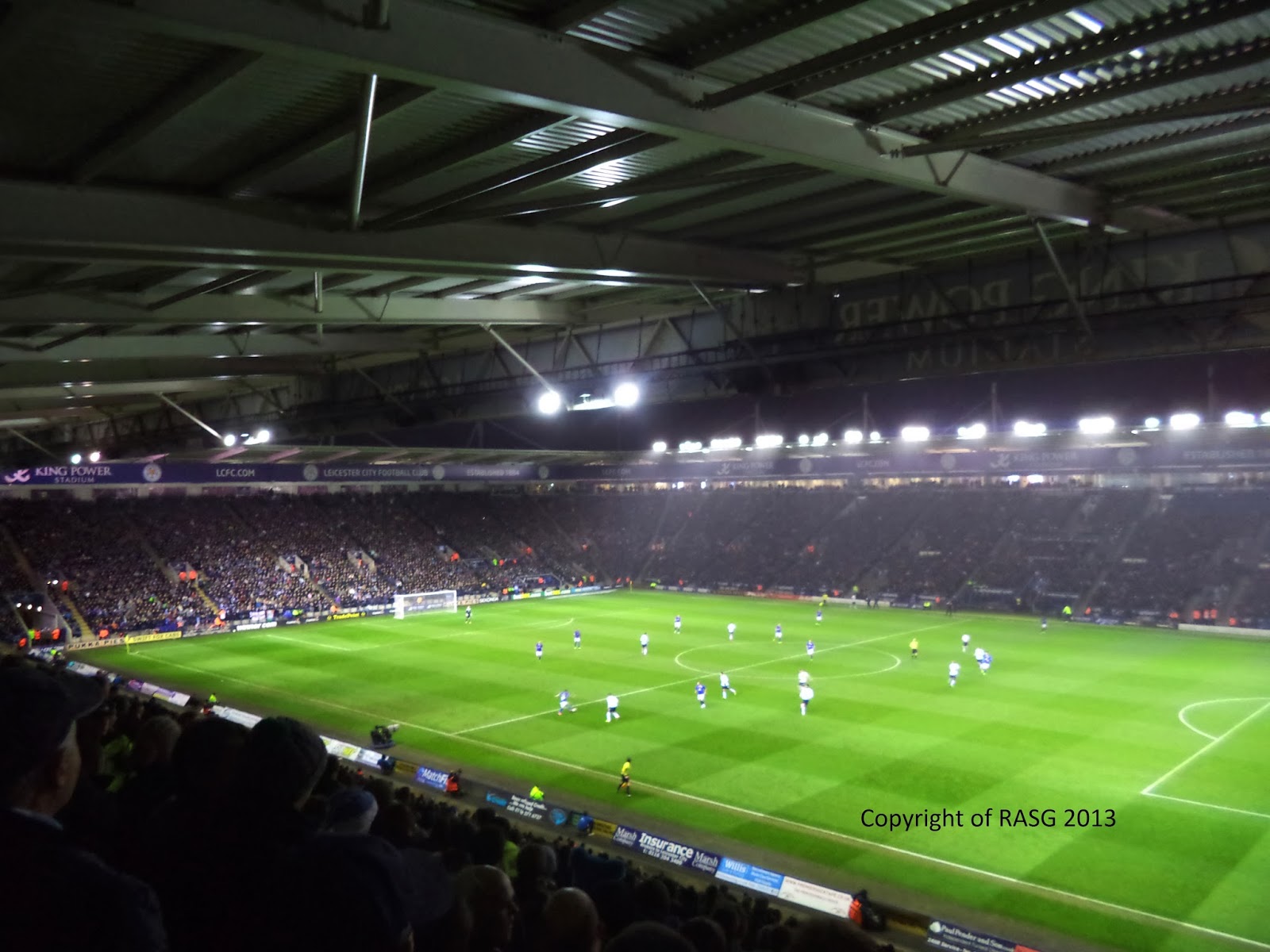 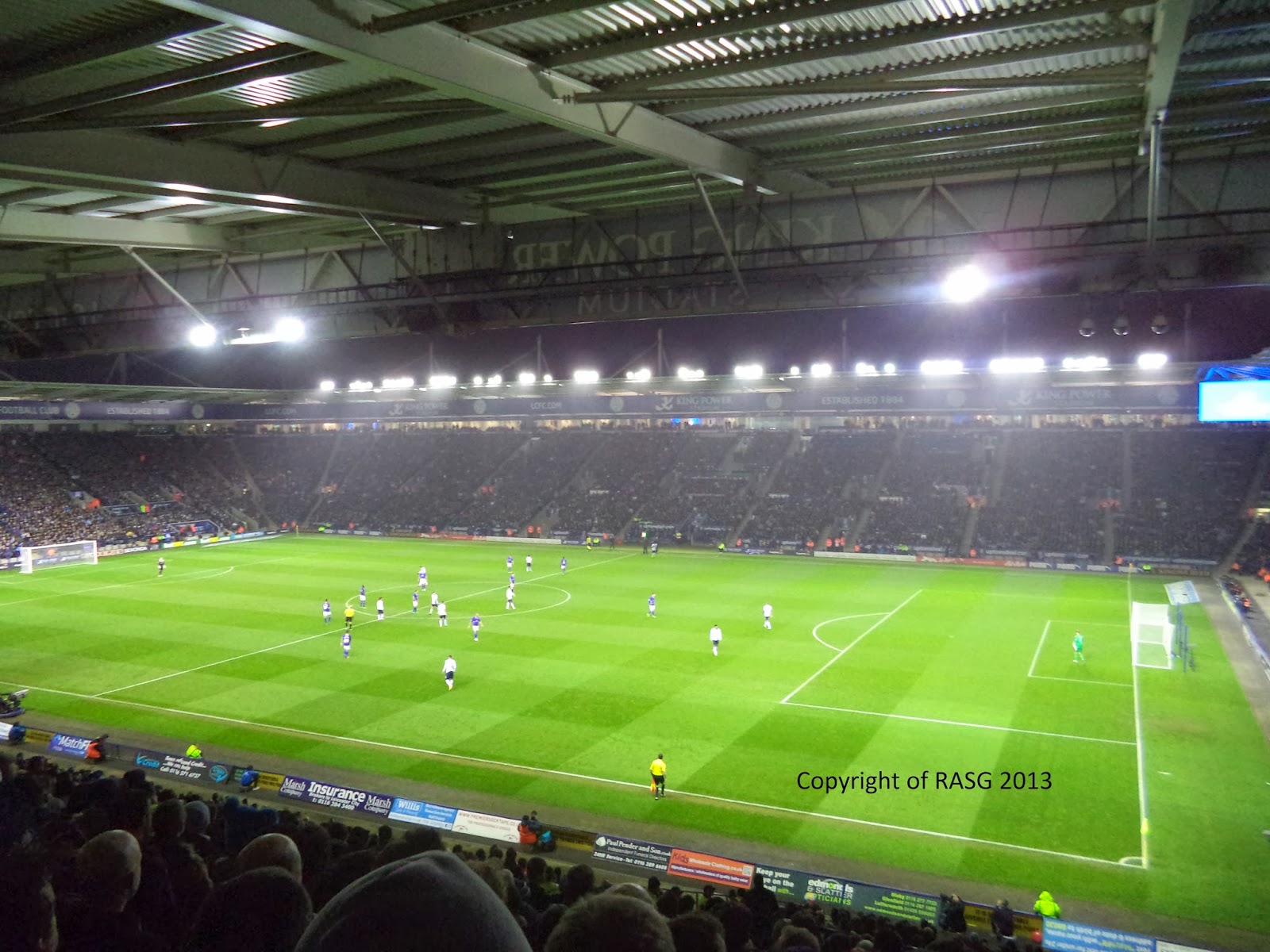 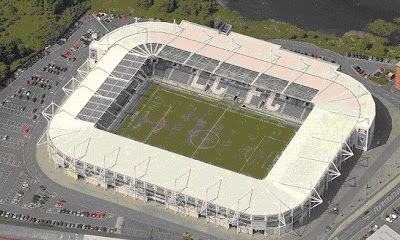 Adrian and I are both Season Ticket Holders at Leicester City. I have been going since 2004 and Adrian has been going since 1973. The Walkers Stadium is a new “state of the art” arena opened in 2002 and is not far from the old Filbert Street site which is now student accommodation. The ground is easy to access from the M1 and also Leicester Railway Station. From the centre of Leicester there are a number of buses that will take you to the ground, 47 and 84 Arriva will both take you to Aylestone Road then from their is a short walk to the ground. 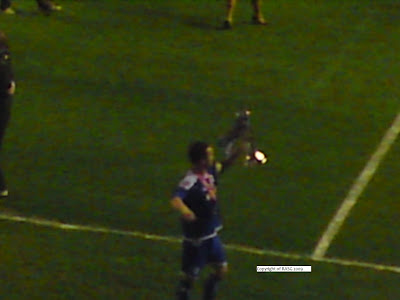 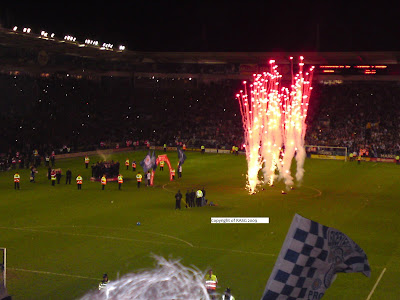 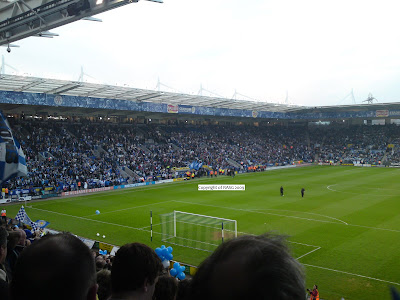 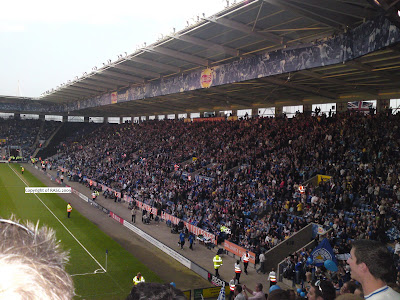 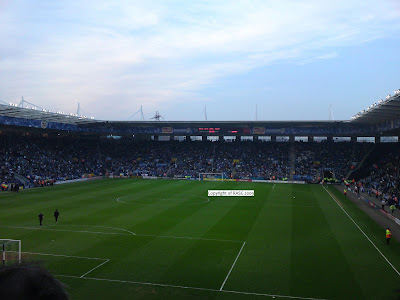 Two of the most in form Premier League teams meet each other in a rearranged midweek fixture, Leicester City verses Chelsea. Leicester City winning 4 games in a row which has seen them jump from the bottom of the table to fourth from bottom and out the relegation zone for the first time since November. As for Jose Mourinho’s Chelsea, they before the game only require two more wins to seal the Premier League title.

Being a night match, I (Ross) decided to leave work early making the journey to Leicester meeting Adrian at his house. We ate our dinner, washed down by a mug of tea before heading to the King Power Stadium. From Adrian’s house, the King Power Stadium is only a 30 minute walk which meant we arrived in plenty of time to get photos outside the stadium.

Leicester City’s success in the late 1990s saw attendances rise, which meant that virtually every game at Filbert Street was a sell-out by the end of the decade. Relocation was soon back on the cards; several similar sized clubs had relocated to new stadiums around this time, including Leicester's midland rivals Stoke City and Derby County.

Some parts of the ground – the East and North Stands in particular – were also somewhat outdated, which led the manager, Martin O'Neill to joke that when he showed Filbert Street to new signings he led them backwards out of the player’s tunnel to prevent them from seeing the East Stand.

In early 1998 plans were announced for a 40,000 all-seater stadium to be built at Bede Island South in time for the 2000–01 season, but these plans were abandoned on 5 January 2000. Chairman John Elsom vowed that other options, including relocation to another site or even further redevelopment of Filbert Street, would be considered, hoping that either option would have materialised by August 2002.

The relocation option was soon settled upon, as plans were unveiled on 2 November 2000 for a 32,000-seat stadium at nearby Freeman's Wharf, with 2003–04 being the expected completion date, although it was suggested at the time relocation could happen at the start of the 2002–03 season. Work on the stadium began in the summer of 2001, and by 10 October that year it was confirmed that the new stadium would be ready for the 2002–03 season.

The stadium was completed on time in the summer of 2002, ready for Leicester to take up residence for the start of the 2002–03 season. However, it was not an easy start at their new stadium as they had just been relegated from the Premier League and were more than £30million in debt.

Jose Mourinho's side needed to call on all their reserves of quality and resilience to overcome Leicester City's fiercely determined challenge which earned them a deserved first-half lead through Marc Albrighton.

As expectations of another victory on the road to Premier League safety rose in a thunderous atmosphere, Chelsea responded in the style of champions-elect to earn the victory that means they will be crowned champions for the first time in five years if they beat Crystal Palace at Stamford Bridge.

Didier Drogba equalised early in the second half and further goals from captain John Terry and Ramires wrapped up a win that was testimony to the qualities that have put Chelsea on the brink of glory.

And in a swipe at the Arsenal fans who criticised their approach during their last match, a goalless draw at the Emirates, the visiting fans roared their team to the final whistle with chants of "boring, boring Chelsea".

As for the atmosphere inside the King Power Stadium, the recent introduction of ‘clappers’ (folded cardboard which generates noise when you clap it against your hand) has seen an increase in atmosphere spurring on the fearless foxes approach as they battle against the drop.

After the game, I met up with Adrian outside the club shop and started to walk back to his house. When we arrived back at Adrian’s house after a 30 minute walk, we started to notice the road went quiet and suddenly a convoy of police and 5 Kingsferry Coaches containing Chelsea supporters making their way back to the M1.

Leicester put in a great effort and probably unlucky not to get a draw. Early injuries in the first half prevented Leicester City manager, Nigel Pearson, from making changes later on in the match. As for Chelsea, they came out after half time a much improved side and go back to the capital with all three points.

So now I have actually been in all parts of the King Power Stadium and that includes the away end. Yes bizarrely, I, a Leicester City season ticket holder watched this cup game from the away end amongst lots of noisey Mancs!
The reason, when I went to purchase my 1 cup ticket on 20th Nov for a game scheduled for 17th Dec, I was informed we had sold out! To say I was surprised was an understatement. Being a cup game the visiting team had been allocated a larger area, I have no issue with that, but Leicester City unbeknown to me and many more were offering up to 6 tickets per season ticket holder. In my opinion a complete blasé way of distributing tickets. The club will feel vindicated as they sold all tickets with a month to go and I must take some blame for not looking at the website for the ticket distribution.
Thanks to smart thinking, Ross who was unable to attend the game due to college commitments, he registered me with Man City and when their distribution came on general sale got me 2 tickets. I was accompanied by son number 3, Sam aged 14.
It was an interesting experience, certainly for Sam who normally watches City from the comfort of the Family Stand, standing all night with what seemed half of Manchester was out of the ordinary.
The game itself went according to expectation, the Premier League giants outplayed Leicester, some of the passing and movement was world class.
Kolarov’s brilliant freekick set Man City on the way followed by 2 goals from close range, 1 in each half from Edin Dzeko took the game beyond Leicester.
The home side worked hard and deserved Lloyd Dyer’s consolation goal, nobody could fault the effort put in however Manchester City comfortably got through to the semi final. Having just beaten Bayern Munich in Germany, put 6 past Premiership leaders Arsenal, Leicester fans were delighted with only conceding 3!
The visitors have spent millions over the last 4 years most sides in Europe will struggle to compete against them. Such is their strength, when the impressive playmaker David Silva went off he was replaced by Samir Nasri!
A great occasion for Leicester City, a full house and some world class players on view in a competitive fixture which makes you realise what the Premiership is about.
One last observation from the away end, my favourite subject, jobs worth stewards, where were you! Man City fans stood all the way through, I expected that, however standing in the main gangways and steps was dangerous and not a jobs worth insight to inform fans to return to their seats! Our jobs worth friends would sooner tell me, I can’t sit on a vacant seat in stoppage at Anfield or tell a 12 year old to sit down in the Family Stand! But when they are actually required to do something useful, where are they? Some are watching the game the others haven't got the bottle. Football fans don't require these people, they serve no purpose, all that happens is a weak minded pen pusher is given a yellow or orange jacket and suddenly he is transformed into the dictator of North Korea!
Rant over!